The Economic and Social Development of the Port-Cities of the Northern Black Sea Coast,
Late 18th –Beginning of the 20th century 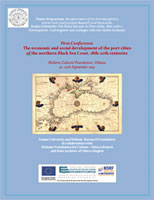 The First Conference of the Black Sea Project, The Economic and Social Development of the Port-Cities of the Northern Black Sea Coast, Late 18th –Beginning of the 20th century will take place in Odessa during 22-27 September 2013. The venue of the conference is in the Hellenic Foundation for Culture-Odessa Branch. The project “The Black Sea and its port-cities from the 18th to the 20th century. Development, convergence and linkages with the global economy” is included in the Thalis Programme "Reinforcement of the Interdisciplinary and/or inter-institutional Research and Innovation" of the operational action “Education and Life Long Learning” which is co-sponsored by the E.U. and the Greek Ministry of Education. The Conference is co-organised with the Hellenic Foundation for Culture-Odessa Branch and the State Archives of Odessa Region.

The aim of the conference is to present the first results of the research in the project and to present papers related to its themes. The project seeks the identification, analysis and synthesis of the eco-nomic and social develοpment of 20 port-cities of the Black Sea that formed an integrated market that became the larger grain-exporting area in the world in the nineteenth century until the beginning of the twentieth century. By placing in the centre of the analysis the sea and its ports, the analysis penetrates in the economic activities of the port-cities, the coastal area and the hinterland, the integration of markets and their interlinkages with the global economy, beyond political boundaries and divisions. The linkages with the global economy triggered development and convergence of regional markets. Papers are related to the subject of the project along the following six axes:
The Organising Committee
Dr Evrydiki Sifneos (coordinator of the research of the northern Black Sea coast, National Research Foundation)
Professor Gelina Harlaftis (project coordinator, Ionian University)
Sofronis Paradeisopoulos (Hellenic Foundation for Culture – Odessa Branch)
Lilya Bilousova, (State Archive of Odessa Region)

3) The Odessa Port through "Hidden" Materials in the French Archives, Ion Varta, Archival Service of the Republic of Moldova, Moldova

4)The Black Sea Port Cities in the Ukrainian National Historiographical Legacy of the 19th And 20th Centuries, Larisa Yakubova, Institute for History of Ukraine-National Academy of Sciences of Ukraine, Kiev, Ukraine

12.00-14.00 Session II- Before and after the formation of the Russian port-cities
Chair: Liliya Bilousova

1) The Greek Community in Southern Crimea Under Ottoman Rule, Oleksandr Halenko, Institute for History of Ukraine-National Academy of Sciences of Ukraine, Kiev, Ukraine

4) Governor-Generals of The South of Ukraine: The Formation and Implementation of Settlement Policy and the Development of The Region (1774 – end Of The 1890s), Valentina Shandra, Institute for History of Ukraine-National Academy of Sciences of Ukraine, Kiev, Ukraine

1) The Greeks of Odessa and the Architecture of the City, Vassilis Colonas, School of Architecture University of Thessaly, Volos, Greece

2) The Making of a New Town. The Rise and Fall of Odessa, 18th-20th c., Athina Vitopoulou and Alexandra Yerolympos, School of Architecture and School of Spatial Planning and Development, Faculty of Engineering, Aristotle University of Thessaloniki, Thessaloniki, Greece

4) The Image of Odessa among the Greeks in the 1810's. Public Reports and Exchanges, Nassia Yakovaki, Department of Political Science and Public Administration of the University of Athens, Athens, Greece

1) Social Network Theory as an Explanatory Tool for the Development of ‘Port-Cities’. A Discussion Focusing on Nezhin, Ioannis Carras, Ionian University, Corfu, Greece

2) The Making of a Book: Writing on the Particularity of Odessa as an Imperial City, Evrydiki Sifneos, Institute for Historical Studies, The National Hellenic Research Foundation, Athens, Greece

4) Nuptiality in Port-Cities: on the Material of the Greek Community of Odessa, 1800-1920, Sofronis Paradeisopoulos, Hellenic Foundation for Culture – Odessa Branch, Ukraine

1) Studying the Economic Development of the Russian Black Sea in the Long 19th century: The Example of Odessa, Socrates Petmezas, George Kostelenos and Alexandra Papadopoulou, Department of History and Archaeology, University of Crete/Department of History, Ionian University, Rethymnon/Corfu, Greece

3) The Transportation Network of the Northern Black Sea Coast within the Framework of the Black Sea Trade in the 18th and 19th Centuries, Alexander Romantsov, Institute for History of Ukraine-National Academy of Sciences of Ukraine, Kiev, Ukraine

4) Bills of Exchange Operations of the Odessa Branch of the State Bank at the End of the 19th century, Vladimir Morozan, St. Petersburgh State University, St. Petersburgh, Russia

2) Τhe Port of Theodosia in the Crimea and its Linkages as a Grain Export Gateway with the Mediterannean and West European Markets (end of 19th-beginning of the 20th Centuries), Anna Sydorenko, Ionian University, Corfu, Greece

4) Black Sea Ports of the Russian Empire in the International Transit Trade in the First Half of the 19th Century, Taras Goncharuk, Odessa I.I.Mechnikov National University, Odessa, Ukraine

1) The Participation of Greek Merchants in the Credit/Banking Life of Odessa in the 19th Century, Irina Druzhkova, School of Socio-Economic Sciences, Odessa National Academy of Engineering Refrigeration, Odessa, Ukraine

2) The Contribution of Chios Merchants to the Economic and Social Developmentof the Black Sea and the Sea of Azov Regions, Valery Tomazov, Institute of History of Ukraine, National Academy of Sciences of Ukraine, Kiev, Ukraine

2) The Port of Marseilles: A Privileged Observatory of Black Sea Trade in the 19th Century, Apostolos Delis, Institute of Mediterranean Studies, University of Crete, Rethymnon, Greece

1)The Legal Status of Foreign Entrepreneurs in Odessa And Ismail (1807-1859), Andrei Emilciuc, Institute of History of the Academy of Sciences of Moldova, Moldava

1) Documents on the History of Education and Science in the South of the Russian Empire as a Source for the Study of the Social Infrastructure of the Northern Black Sea Coast Port Cities, Sergei Berezin, State Archives of Odessa Region, Odessa, Ukraine

3) Between the Golden Fleece and the Onion Domes: Church and Community Among the Greeks of Odessa in the Long 19th Century, Nikos Chrissidis, Southern Connecticut State University, USA

4) On the Issue of the Confiscation of Objects of Worship of the Greek Orthodox Churches in Kerch in the 1920s and 1930s, Natalia Bykovskaya, Kerch Cultural and Historical Preserve, Ukraine

2) Fisheries of the Eastern Coast of the Azov Sea in the Late 18th – 19th cc. – Organization, Infrastructure and Everyday Life, Alexei Kraikovski, Center for Environmental and Technological History-European University of St. Petersburg, Russia

3) Snake Island (Ostriv Zmiinyi) as an Important Communication Center of the Northwestern Black Sea Cost at the end of the 18th – beginning of the 20th Centuries, Elena Shtepko, State Archives of Odessa Region, Odessa, Ukraine

2) Constructing the databases "Jason" (Merchants, Bankers and Shipowners of the Black Sea), "Argo" (The Fleet of the Black-Sea) and the "Golden Fleece" (Arrivals and Departures from Black Sea Ports) from the 18th to the 20th Centuries, Gelina Harlaftis, Ionian University, Greece